Towing laws differ across states, and there can be big fines if you break them

You might think that towing a caravan is a quiet pastime that’s not going to attract the attention of the law, yet there are plenty of rules and regulations that relate to towing that could bring you undone, some of them attracting hefty fines and demerit points.

Each state is different

The main safety standards for vehicles and ‘vans are set by the Federal government. Things like trailer standards, set in a document called VSB1, are then enforced by state and territory governments with their own laws. But each state interprets the standards differently…

It’s the same with the Australian road rules. They have no legal effect, until enacted in each state and territory. While much effort has been made to standardise road rules, there remain some that are unique – including those involving towing.

One of the main things that you need to get right is to not exceed your van’s maximum allowed trailer weight (Aggregate Trailer Mass), which you’ll find on the van’s compliance plate. The only way you’ll know for sure you haven’t exceeded this is to get your caravan weighed at a public weigh bridge when it’s all loaded up ready to go on a trip.

If you just guess the weight and get it wrong, you may cop a fine and loss of points. For example, in NSW the fine is $439 and a loss of three points for exceeding the plated ATM.

In Victoria, there are several fines according to the level of over-loading, but the highest is for when the van’s weight is between 15 and 20 per cent more than the ATM. If caught, that’ll cost you a whopping $1682 (from July 1, 2018), but no loss of points.

While you’re unlikely to suddenly find the police doing random caravan weight testing as often they do random breath testing, overweight caravans are increasingly on the police radar, if a much-publicized spot check last year is anything to go by.

Towing mirrors are a pain to fit and hard to set up so they don’t knock out of adjustment or simply fall off while you’re driving. However, you do need towing mirrors to see behind your van – if you don’t, you’re up for a fine.

In Victoria, it’s a problem if you “Fail to have a clear view of the road and traffic, ahead, behind and to each side of the driver”. You don’t lose points, but you’ll have to cough up a $233 fine.

Australian Design Rules state that your towbar must not obscure the number plate when the van’s not attached. If your towbar falls into this category, in NSW you’ll be hit up with a $439 fine and three demerit points under the “Use vehicle without correctly fixed/displayed number plate” rule.

In Victoria, the same issue (with slightly different wording: “Use of vehicle where number plate not affixed or displayed in accordance with regulations”) will only cop a $161 fine, but you’ll still lose three points.

There’s another number plate requirement that’s more likely to bring you the attention of the law if you (or your caravan manufacturer) has got it wrong. According to Section 9.1.1.1 of ADR 61/02 Vehicle Markings, a number plate fitted to the rear of the vehicle must not be more than 1300mm from the ground. If you’ve bought an off-road van or have had your van’s axles flipped over for better clearance, you might want to check the number plate height.

In Victoria, under the “Use vehicle (other than a large vehicle) that is unsafe or has been modified or does not comply with the Standards for Registration” rule, you could be up for the double whammy of a defect notice plus $403 fine. 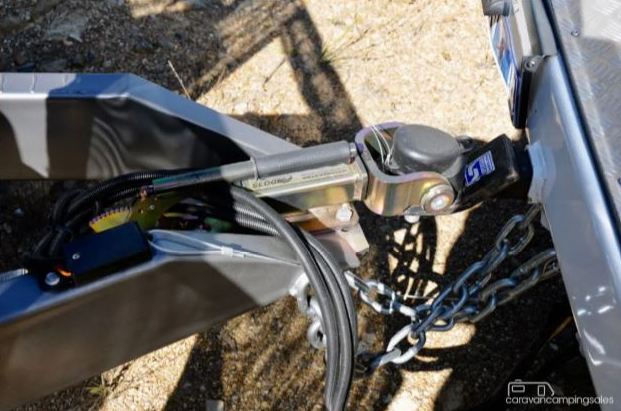 You might cross every t and dot every i with your vehicle and van’s registration compliance, but fail on one small but very significant point. When you own a few vehicles, it’s all too easy to forget to re-register the caravan. If you get caught doing that in NSW, it’ll cost you $659.

If your vehicle and van measure more than 7.5 metres long, you can fit a “Do Not Overtake Turning Vehicle” sign to the back that permits a legal turn from an adjacent lane when turning off a multi-lane road. But if you don’t have the sign (or it’s not correctly fitted) then you could be in trouble.

In NSW, breaking Rule 28 (1), which is “Not turn left from multi-lane road from within left lane” will set you back $257 and two demerit points.

In Queensland, it’s just $75 but the breach will also take two demerit points from your licence.

The states and territories are so close to reaching harmony with trailer towing speed limits, but are not quite there yet.

In all states except two, you’re allowed to drive at the same posted speed limit as cars. In WA, however, the maximum towing speed limit for any light towing combination is 100km/h. In NSW, if your vehicle and caravan weigh up to 4.5 tonnes combined, you can drive at the prevailing speed limit (that is, up to 110km/h), but if the rig weighs more than 4.5 tonnes in total, the speed limit is capped at 100km/h.

Perhaps your van got a bit of a sway up while driving down the freeway? Hopefully it did not result in a crash, but either way, in NSW there’s a rule that can be applied called “Tow trailer or vehicle not have safe control of vehicle etc”.

There is one law relating to towing that you would hope that people were smart enough to obey. In this case, the law is the same, almost word for word, in most states. Obviously, lawmakers are not confident that people are all that smart when it comes to this particular ‘joy riding’ offence.

The contravention is similar across jurisdictions, but in Victoria it’s referred to as “Drive motor vehicle with person in attached trailer”. The penalty is two demerit points and $322. 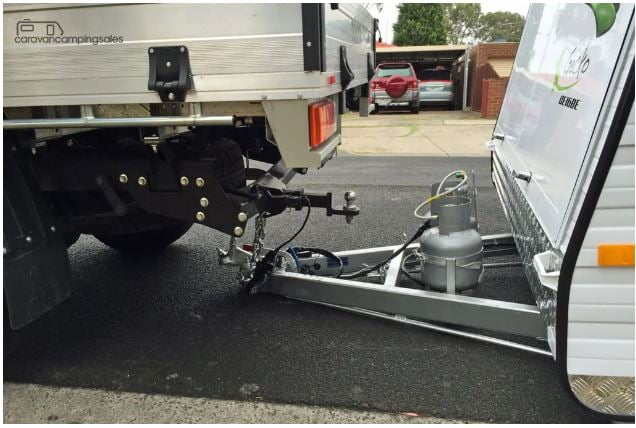 Just when you think you’ve done everything right, you forget one simple but crucial thing: locking down the coupling on the towball when hitching up.

In Tasmania, that’s “Use/cause or permit the use of light combination with coupling not securely fastened”, and you can only hope it’s the result of the constabulary noticing this as they pass by rather than after your caravan has slipped off the towball. The fine is precisely $278.25, with no loss of points.

Ever been hit with a towing-related fine?